One of the fundamental design decisions that I faced was whether or not to keep the existing lid.  If I kept it I would need to build a collar to go between it and the top edge of the freezer in order to give the necessary height for the two kegs that sit on the compressor hump and to provide a surface to mount the beer taps through.  The other option is to discard the lid and make a new one from scratch, with the collar built into it and then insulate it up the best that I can (bearing in mind that the cold air sits in the bottom of a chest freezer, thereby making a perfect seal on the lid less critical than a front loading fridge).

I decided to go with the second option – to build a whole new lid (with built-in collar).  I feel that building around the existing lid doesn’t really save any time or expense, and merely serves as a restriction.  A scratch-built lid can be designed to more efficiently use space, and I think that I run a better chance of having my lid line up with the body of the freezer if I am controlling all the dimensions.

I waited until I had built the body skin all the way up to the top surface of trim pieces before embarking on the lid design.  This meant that I could build directly to the final dimensions of the body and ensure that all my shut-lines would be even and symmetrical.

I elected to build a double-wall collar rather than a single-wall solid wood one.  Although more complex in its construction it does have the advantage of better thermal insulation due to the pocket of dead air.  I also wanted to use the existing door seal so any collar that I make would have to be very thick to be small enough on the inside to take the seal yet large enough on the outside to meet with the new body trim.  A single-skin collar this thick would be enormously heavy to lift.

The most important surface on the lid is the bottom edge.  This needs to be perfectly flat to permit the door seal to mate with the top surface of the freezer correctly.  For this reason I decided to use a flat panel of 12mm particle board – it is manufactured flatter than anything I could create with planks.  I only needed to cut one exterior edge with the circular saw and run around the inside with the jigsaw.

The sheet of particle board that I picked up from the hardware store was slightly too small in one dimension.  So once I had formed the baseboard above, I then needed to cut it in half.  While this may seem undesirable (and indeed it is!) it was far cheaper than going to the next size up (which would also have been challenging to fit in my car) and it allowed me a bit of wiggle room to adjust the length of the lid so that the gap with the freezer body back-to-front was the same as side-to-side.

I used lengths of pine to build up the sides – starting with simple butt joints for the interior walls and mitres on the front and sides of the exterior.  The gap left by splitting the baseboard will be filled with some bits of scrap.

Seeing as the collar will be subject to heating and cooling, the next step before putting the lid on is to paint the insides to seal the wood against condensation and to fill any gaps.

Next to go on is the lid.  Here I used 12mm plywood, again cut slightly large and then flush trimmed with the router.  Again, gloss paint is used to seal all the wood that might be subject to condensation and then the existing door seal gets screwed in place.  The top surface of the lid will probably need some insulation, but I’ll deal with that later.

And lastly, a little more trim goes on around the top edge to hide the nasty plywood end-grain and break up what would otherwise be a fairly featureless slab of plain wood.

Next steps – filling and sanding all gaps/nail holes, hinging the lid and building a mount for the drip tray.

After skinning the body of the keezer in v-groove panelling there were a number of raw edges that really needed to be covered.  Although I had run the router down these butt joints to get a perfectly flush finish, any application of stain and varnish would make them highly visible due to all the end-grain.  Also the more nails that I can hide the better!

The solution is to put on some trim strips to cover these areas, and this is also an opportunity to use some decorative moldings to add a little more character to the keezer. 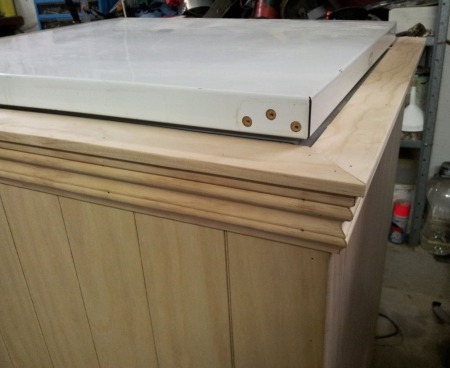 The broad capping strip you can see in the photo above also has the added benefit of providing a surface for the lid to meet with.  I will need to leave a gap so that the internal sealing strip correctly mates with the top of the freezer and has sufficient weight on it to hold it in place, so I thought this deep wooden strip would make the shut-line more attractive.

Next to go on is a skirting around the base.  Rather than buy a molding I took a length of 90x19mm pine board and ran the router down it with a quarter-round bit.  These were placed 20mm off the floor to allow room for the casters to move around even if placed on carpet.  And lastly some 30mm edge trim went on both the left and right edges of the front panel to help with knocks and to hide that ugly raw plywood edge.

Next step – the lid!

Now that the framing has been done I have a surface to attach some cladding to.  The obvious choice would be thin plywood, but I worried that this would look quite featureless, expansive and plain.  So I looked for some v-grooved panelling to mimic the look of wainscoting.  This was not the easiest thing to track down and, due to the slightly annoying dimensions of the freezer it would not fit neatly within a standard 2400x1200mm sheet, so it also ended up being more expensive than I would have liked ($91 for 2700x1200mm). I picked the wood up from a company called Bruynzeel and I was pretty unimpressed by the experience.  They took two weeks to get the material in and cut it to size and, although I was assured I’d be getting A-grade material specifically appropriate for stain and varnish, I was quite disappointed to discover that the surface veneer was full of cracks and filler and was even marred by black rubber footprints! All I hope is that with a little stain and varnish it still looks pretty smart, otherwise I’ll be kicking myself for not just making it out of MDF on the cheap and painting it.

After constructing the frame I decided to throw in an extra horizontal bar halfway down each side.  This serves two purposes: to prevent the 6mm ply from flexing in the middle should it be knocked by something; and to give something meaty to screw the drip tray into.

The ply itself went on fairly smoothly.  My approach was to cut the panels too large, clamp them against the top edge, measure for groove symmetry, glue and nail them with panel pins, trim to less than 1cm excess with a hand saw and then flush-trim with the router.  This strategy was pretty painless, very tolerant of minor errors and produced wonderfully neat joins (even if it did cover me in wood shavings!)

The next steps will be the addition of some trim to the top and bottom edges of the cladding (to hide all the raw edges) and to start work on the lid.

In 2010 McDonalds brought out a value pack called the Family Dinner Box.  This box included: 2 big macs, 2 cheeseburgers, 4 fries, 4 drinks and 6 nuggets.  John and I had often wondered if it would be possible for one man to eat the whole thing.  John had decided that he was up to the task – he merely had to time his run to favour his chances of success.  One afternoon, after a long day of rock climbing down at Nowra, John announced that the challenge was on!  On the drive back when he felt at his most hungry he would pull into the nearest Maccas and order up.

When asked afterwards what was most difficult about the challenge, John’s insights were: there is an awful lot of bread, the nuggets have to be spread out because they’re confrontingly dense, and all those fries leave a film of slippery salty fat all over every surface of your mouth that simply will not disappear.

The first step with the new keezer is to box it in.  A skeleton of cheap pine will provide the back bone for skinning the freezer.

For ease of relocating the keezer I have elected to put it on casters.  Many people build the casters into the wooden frame but then when it has to be moved from one property to another you are faced with the decision of either moving the whole thing in one (running the risk of damaging the cladding) or to remove the freezer from its surround.  With the casters attached to the frame the heavy freezer has to be lifted out of the tight fitting frame.  My decision was to mount casters to the freezer itself and have the skin lift off the freezer.

The bottom rail took a little light chiselling to allow for each of the bumps of the freezer, but without too much fuss it now sits on the caster tabs quite happily.

On went the rest of the framing to finally fully box in the freezer.  The only challenge was toe-nailing the top and bottom frames to the uprights – but with a couple of strategic pilot holes and some expert bracing from Mary it all went without a hitch.  The top edge of the top frame will be planed flush to the top edge of the freezer with a flush-trimming router bit later, once I have resolved how the top collar will work.  But in terms of the bottom half of the freezer all the donkey-work is done and with a straight, square and solid frame to work off skinning it with the final panelling should be speedy and gratifying.