Anyone who has been following the progress on the LowBrau project would have seen a whole flurry of activity followed by a long period of silence.  Within 4 days of starting I had got to the stage where the case was drilled and filed for all components; the screen, buttons, LED indicators, temperature probe socket, buzzer, arduino and wiring shield were wired and mounted; the screen protector made and adhered with waterproof silicone caulk; and the SSRs and heatsink mated, mounted and wired up.

Pretty much everything was complete and ready for a test run.  And indeed I did, uploading my control software to the arduino, powering it off USB and everything ran as it should from menus to button presses, etc.  Excellent – all that remains is to remove the USB power and power it stand-alone off its own power supply.

This is where my cheap ebay power supply vendor threw a spanner in the works.  In a break from character I didn’t power it up and throw my multimeter over it before installing it in the LowBrau controller.  Unfortunately for me I was unaware that this power supply has been incorrectly labelled (the sticker placed upside-down). 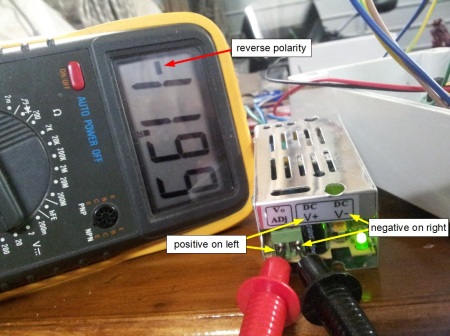 I am also quite surprised that arduinos (especially being aimed at the hobbyist market) do not feature a diode to protect against a reverse polarity situation.  Incorrect supply wiring will instantly destroy an arduino, which is exactly what happened to mine.

Annoyingly the arduino cost far more than the power supply that took it out.  And without a spare I had to wait for a replacement and in the intervening time I lost momentum with it all.  But I still have plans to get back onto it in the future.

So if there was ever an encouragement to embrace the inner-pedant and check everything yourself, irrespective of what the manufacturer has written, then this is it!