Two days ago I pitched a hefeweizen that was notorious for vomiting through the airlock.  This time I used a blow-off tube.

Here’s an update showing how successful it was…

Fermentation is currently happening at a furious pace.  You can see that the collection bottle is full of krausen, which would otherwise have ruined an airlock.  Taping the hose down into the collection bottle was definitely a good idea – when I opened the door to take this photo it caused an eruption of activity.  Without the tape the hose would certainly be blown out of the bottle.

This technique seems to be delivering the goods – and will definitely be an addition to my arsenal.  In many respects I think I may move away from airlocks entirely for primary fermentation, and just use them for conditioning, dry-hopping, etc.

I recently lost a batch of beer when the krausen (the top layer of yeasty foam) completely filled the headspace of my fermenter and vomited through the airlock.  By doing so it displaced all the liquid in the airlock, leaving it dry (and filthy) and it also filled the fermentation fridge with half-fermented wort.  This of course went entirely moldy and rancid.

The solution this time around is to replace the airlock with a blow-off tube.  This setup is essentially a junior version of what they have installed in commercial fermenters.  The tube runs out of the top of the fermenter and into a plastic bottle full of sanitizer.

I found that 6mm vinyl hose from Bunnings worked fine, although it did need a few turns of electrical tape to increase the diameter sufficiently to make it fit snugly in the grommet of the fermenter lid.  The whole thing got flushed with sanitizer before the free end was placed under a volume of spare sanitizer in the soft-drink bottle.  A little more tape holds the tube in place.

Should a blow-off occur, any krausen should simply accumulate in the bottle full of sanitizer and no airlock will be lost.

I’ve just produced my first dry hopped beer, but what is dry hopping and why do it?

Dry hopping is the addition of hops to fermenting beer after it has cooled.  Hops are used in two primary roles – to add bitterness and to add aromatic flavour.  Bitterness comes from boiling hops: this converts alpha acid to iso-alpha acid, which we perceive as bitterness.  The longer you boil the better the conversion and the more bitterness you get from a given quantity of hops.  For this reason bittering hops go in at the beginning of the boil.  Hops also contain other compounds which contribute to aroma and flavour.  The boiling process drives off these volatile compounds, so boiling is always a trade off between bitterness and aroma.  For this reason hops for tasty floral notes go in right at the end of the boil.  Using the counter-flow chiller also helps lock in this flavour.

But no matter how late the hops go in there is always a loss.  Also the action of fermentation also drives off delicate hoppy notes – the escaping CO2 takes with it hop character.  So the solution is dry hopping (well, one of the solutions).

I brewed up an India Pale Ale with a bitterness of 56IBU.  I fermented this out until the primary fermentation had ended.  I transferred the beer from one fermenter to another, thereby removing the beer from the yeast sediment.  I purged the headspace of the new fermenter with CO2 and bunged on a fresh airlock.  Standard stuff.

I weighed out 25g of Cascade hops and placed them in a homemade pantyhose hop-sock.  To stop the sock from floating I threw a stainless steel teaspoon into it too.  I knotted the end and in the fermenter it went. 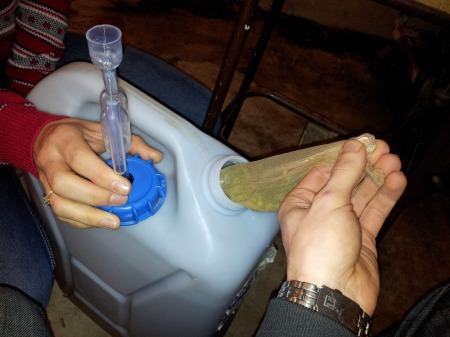 I left the beer at fermentation temperature (18C) for another 7 days, then turned the fridge down to 7C for another 2 or so.  This caused any remaining yeast to floc out and stick to the bottom of the fermenter.  Out came the beer and into a keg.

What are the results like?  Pretty bloody encouraging!  Very aromatic and quite floral.  There is very little grassy taste (which I was worried about with using this method).  The beer wasn’t fully cold or gassed at the time, so I’m reticent to call the verdict just yet – but I’m pretty pumped about this one!

And, finally, the pantyhose hop-sock did a wonderful job at containing the pellet hops, with no detectable bits of hops making it into the beer.

It’s cold and wintery and there’s something about brewing yeast that is clearly some kind of cosmic prank:  all the beers you drink in summer need to be brewed at cold temperatures (lagers) and all the hearty ales that you might drink in winter like a warm temp!

I thought it time to complete the fermentation fridge by giving it the ability to heat as well as cool (after struggling to brew a hefeweizen under an electric blanket in the kitchen!).  My STC-1000 aquarium thermostat already has a heating and cooling side wired up so really all that is required is to put in some kind of heating element.  I originally had a 28W lightbulb doing the job, but I didn’t really like the fact that I could burn my fridge down (I had a close call with an ominous brown discolouration of the liner) and the UV put out by the lamp is not exactly great for beer (it comes in brown bottles for a reason!) .  So time for a proper heater…

There are two main styles available: a belt and a pad.  Belts are cheaper and more efficient at heating your brew as they wrap around the side of the fermenter and conduct directly into the beer.  But I brew inside a well-insulated fridge and rely on a thermostat taking readings of the air inside the fridge.  Heat the brew and it’s going to overshoot wildly while the air inside the fridge catches up – I don’t want to use my beer as a makeshift radiator!

I went with a heat pad.  It sits nicely in the bottom of the fridge a shelf or two below the beer so it’s heating the air and not the beer directly.

It’s only a 25W model.  I figured that it was pretty much the same as the light bulb I’d been using.  After watching it only increase temperatures incredibly slowly over a number of hours I began to get worried.  But no need to – I had 40L of beer in the fridge and it takes a while for things to reach equilibrium.  So if you’re wondering: a 25W pad is perfectly capable!  In fact its low “seeping” power means that it doesn’t rapidly heat, trip the thermostat, overrun, plunge and then repeat over and over.

The primary purpose of the fridge is to maintain the perfect brew temperature during fermentation.  For ales this is around the 18C mark.  Sure, fridges come with their own temperature control but you’re never going to see anything about ~6C.  So you need some sort of additional control mechanism to achieve the temperature ranges we want to play with.

The solution is a thermostat that sits between the fridge and the power socket that turns the fridge on and off in response to a temperature probe that sits inside the fridge.  You can buy such controllers from homebrew shops – but you can also easily assemble your own for a fraction of the price.

The device that I found on ebay is advertised as an aquarium controller.  I don’t think it actually is – it’s just a generic industrial controller – the STC-1000, for what it’s worth.

This device is has two switching circuits, one for cooling and one for heating, meaning that you can use it in conjunction with a heating pad for a wide variety of tasks and all throughout the year.

The connections on the back are simply screw-down terminals so you’ll need an extension cord (or two if you want both heating and cooling circuits), some terminal strip, cable ties and an appropriate electrically safe container to mount it in.

Spend for my thermostat: $40