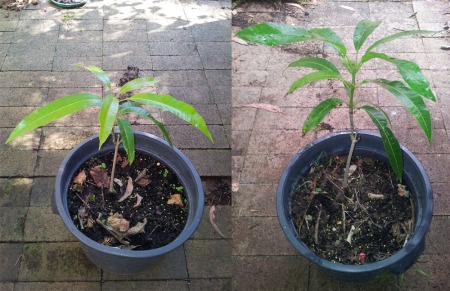 While I was in the garden I thought I might take the opportunity to record the recent growth of the mango with a before and after shot.  On the left is the mango in March just as summer has ended; the right is November showing growth through the spring months.  It was pretty much dormant during the winter cold, but has doubled in size since the weather has been warming.

I live in constant hope that one day I’ll see it fruit, but at the moment there’s no sign of any flower buds forming.  But surely this is all good progress in the right direction!

Another addition to what is beginning to look convincingly like a small orchard is the mango.  It’s into its second year, although I still declare it one year old because I essentially neglected it for a full year and it responded with absolutely no growth whatsoever.

I grew this plant from seed from a mango that I collected from a friend’s garden in Drummoyne.  Growing mangoes from seed is actually a pretty cool process.  You cut the flesh away (and eat it!), let the stone dry a little for two days or so such that the remaining flesh isn’t all slimey.  Next grab a pair of garden secateurs and cut around the convex edge of the stone.  Fold it open like an oyster and inside is a fleshy embryo.  This goes vertically into some soil and a couple of weeks later you have a mango plant!

Some mangoes can only be grown by cutting, and this was one of the motivations to find an old established suburban tree to use as the source of my stone rather than using a store-bought mango.  I figure that the modern commercial mangoes are far more likely to be of the sort that cannot be propagated traditionally.  Whether or not my mango will bear fruit is a good question, and only one that time will answer.

Another interesting episode in the life of the mango was a couple of months ago when it got what I imagine was a fungal infection.  All the leaves went completely black and shrivelled up before dropping off.  The mango was simply a stick and I thought “well bugger that, it’s dead”.  I was too lazy to do anything about it when it was looking sick, and equally I didn’t do anything once I thought it dead – so I left it there as a dessicated monument to poor gardening.  But then a few weeks later it sprouted a thick crop of new, healthier leaves!  Go evolutionarily advantageous immune responses!  Obviously denuded of its habitat whatever was causing the issue also disappeared.