I remember in my uni days people buying packs of sparklers, bundling them together and setting them off in one go.  A single sparkler may last for 30 seconds or more, but with all the heat that is generated when bunched together the whole lot goes up in only a couple of seconds.  The resulting effect is an impressive but very short-lived fountain.  Not only is a lot of heat and light produced, but the combustion also results in an awful lot of gas.  This got me wondering: a whole lot of gas in a short time… was this enough to make a cheap and cheerful rocket?

The first video shows the basic proof of concept.  The questions I had were:

All in all this looked quite promising, especially the slow motion replay which shows plenty of gas production.  So I moved to the next step which was a full trial, fashioning a proper rocket.  I left the bottom entirely open and added some cardboard fins hoping to stop the furious rotation of the first video.

It has to be said that this does indeed make a successful rocket.  Of sorts.

The flight was pretty erratic.  It certainly didn’t have a predictable flight-path – veering off to the side almost instantly.  This combined with the fact that all the tape and cardboard elements sit there on fire after it lands means that my rocket days are over as quickly as they began – it would just be far too easy to set something on fire.

But all in all it’s been a satisfying journey just getting any sort of rocket-like behaviour, and it was certainly spectacular.  And of course, seeing a hunch play out is always rewarding!

In 2010 McDonalds brought out a value pack called the Family Dinner Box.  This box included: 2 big macs, 2 cheeseburgers, 4 fries, 4 drinks and 6 nuggets.  John and I had often wondered if it would be possible for one man to eat the whole thing.  John had decided that he was up to the task – he merely had to time his run to favour his chances of success.  One afternoon, after a long day of rock climbing down at Nowra, John announced that the challenge was on!  On the drive back when he felt at his most hungry he would pull into the nearest Maccas and order up.

When asked afterwards what was most difficult about the challenge, John’s insights were: there is an awful lot of bread, the nuggets have to be spread out because they’re confrontingly dense, and all those fries leave a film of slippery salty fat all over every surface of your mouth that simply will not disappear.

Velovintner (blast from the past)

Okay so this might be the world’s most out of date post, but better late than never?

To tell the story…  it’s the lead-up to the 2011 Tour De France and two of my friends are keen to have a party to mark the first stage.  We’re at the pub and the ideas are flowing – clearly the event should be Tour-themed fancy dress, so plenty of cycling and Frenchness.  At some stage it is proposed that there be an exercise bike that must be continually ridden throughout the course of the evening.  A great idea, but as if that’s ever going to happen…

This sits in the back of my mind for a while and really all it needs is the right incentive to ensure people keep pedalling.  What if the whole party hinges around someone being on the bicycle – as in the whole group needing to rely on the exertions of an individual?  Surely there’s only one thing at a party that, when threatened with removal, would provide the necessary motivation – drink!

So I asked myself a question: could I make a bicycle powered beer vending device?  The answer? Yes!

Richard donated an old exercise bike.  To the wheel of this I cable-tied the magnet out of a trashed hard drive.  I used a reed switch to detect pulses as the magnet passed it with each wheel revolution.  The brains of the Velovintner is an Arduino.  It detects the speed of the cyclist.  The Arduino records in memory the fastest speed that anyone has reached.  The ‘vend point’ at which the beer is allowed to flow is set as a proportion of the fastest speed (eg 85%).  This is funny because if people go mad on the Velovintner it makes it tougher for everyone else – the idea of a runaway, alcohol-fuelled arms race appealed greatly to me.  The max speed value is subject to a decay function, however it is not decay in response to time but decay in response to revolutions (so you still have to sit there pedalling to bring it back down, you can’t just walk away and wait).

I created a large analogue display, the Eiffel Tower needle being driven by a servo connected to one of the Arduino’s PWM outputs.  It is divided into two key zones – the green ‘bon’ zone in which the user can get beer and the red ‘merde’ zone where beer vending is not allowed.  There are 6 subdivisions which in increasing order of speed are: escargot, Citroen 2CV, Phil Liggett, maillot jaune, Mark Cavendish and vitesse de la lumiere.  As long as the needle sits in the bon zone and the ‘pressez vous’ button is pressed then a second servo pushes forward the lever on the beer tap (the actual hand-sized lever I had removed to avoid cheating). 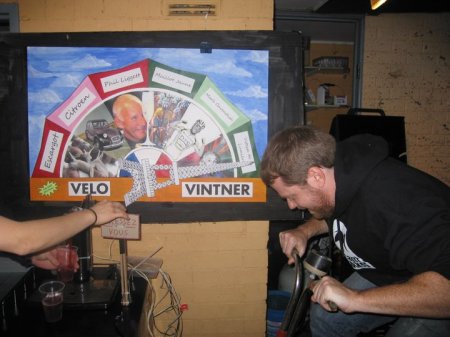 This project was a raging success.  Foremost, it was a fantastic way for people to break the ice at a party.  It was not possible to serve yourself a beer – you had to rope someone else into pedalling for you or operating the button.  Second, it was hilarious listening to the person wanting a beer ‘coaching’ (or berating) the person on the bicycle as the needle flickers back and forth right on the gap between the beer and no-beer zones – it really could be infuriating pressing the ‘pressez vous’ button watching the beer tap jerk back and forth!  Lastly it was a great social experiment – some people when presented with the opportunity to bugger things up for the next person cannot help themselves.  And very, very late in the night an interesting development took place.  Just like gorillas learning a new enclosure, I recall seeing one very drunk man who had discovered that you could wind up the speed on the bike sufficiently high that you had enough time to lean right over the handle bars and get a glass of beer out just before the system shut off!  Hilarious.

Mary and I took the unicycle out for an enjoyable autumn morning  of one-wheel action!